The Holidays are Upon Us

I turn 30 in a few days. What a trip. Definitely not where I thought I'd be at this point in my life, but totally content with where I'm at, so that's cool.

Mighty Sprites did their first [open mic] gig (with singer chick in tow). We didn't do too shabby, and (with some mediocre video editing) we also got a little promo video to aid us in booking a gig... however, the guitar player left the band shortly thereafter, and so now we're set back again... sometimes I feel like being in a band is like a board game, and this case after moving forward 10 spaces, some circumstance has pushed us back 8 spaces. It's demoralizing at times, but for some reason I keep signing myself up for this. Insanity or love I don't really know if there's a difference sometimes haha.

Went ahead and bought my BRGA students their gifts, as well as everyone else on my santa list. 15 BRGA packs in total. Makes the tree look cool. They are slowly finding their rightful persons as the weeks come closer to the holidays. All my Christmas shopping is pretty much finished, I just have three more items for three more individuals and it's through!! 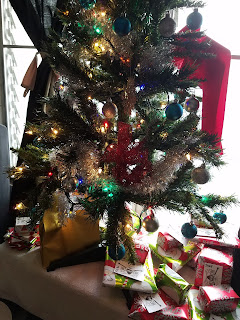 All systems were for my driver's license road test (making it the 4th road test I'd be taking), and I had ambitious plans for December, assuming I'd have driver's license in hand... but, on the day of my test I decided to double check the paperwork (which I usually do days in advance for things like this) and I found out that the vehicle I'd be using had an expired registration. It always seems to be that when I start to spin an ambitious web of tasks that requires someone else to be on top of their shit; it always seems to fail. Oh well. One expensive registration payment (in lieu of road test) later, I am now slated for my next road test at the end of the month now, pushing my plans from December to January, which I suppose is all for the better with how busy I'll be for December anyway. Just makes me look like I'm full of shit... I hate that. 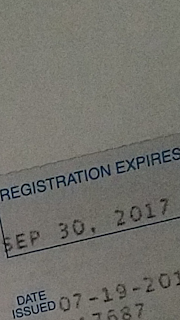 I've been using a pair or recently purchased Guitarleles as an extremely convenient tool to practice guitar when either I'm unbooked/downtiming at surf school, or when my lover drags me to the beach. This thing is a million times better than a "Shredneck" and almost at the same price. I've been able to chart music at work and practice various things. It's been a huge technological advance for me in conjunction with my new headphones and tablet. Now I don't feel like my domestic life is pushing me away from my guitar life. It's a great feeling. 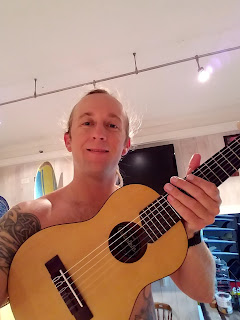 The last podcast I hosted, we tried to implement a live video stream of our show with little success. My friend had deduced that it was most likely my internet connection, so I went to test my internet speed and it was indeed very slow. From that, I decided that it might be time to switch providers or find a better deal and it turned out that my provider was offering an internet speed that was 10 times faster, for 10 dollars cheaper than what I was already paying! I immediately requested to be switched to this alternative and my internet has indeed become much better, and streamable, hoping to re-try the live stream to success next time. Very excited about this, and already the videos that I upload for my guitar students finish in minutes, versus hours like before. It's kind of amazing. Now I just need to upgrade this dinosaur of a laptop...

I also plan on rebranding the podcast being that there's already another N3 podcast out there... once I have finally have a re-brandable product, that's when it'll happen. Till then, it'll be the N3 podcast.

Anyway, that's about it. Had a few gigs with Shar, just been charting like a mad man really. Can't promise that I'll have a blog next month being that I'll be in the tail end of the holidays work-a-thon. Definitely February. Stay tuned.
Posted by Brian at 6:45 PM No comments: