Today marks two weeks of being free from the restaurant world. After two grueling years of slowness and hoping for a break at the restaurant, I have quit. Now, I am completely self-reliant on my own. Relying solely on my skillzzz!!! And nothing on the radar, which frightens me a little bit.

I was winning, then I lost it all. Vegas finally got me. The house always wins. Down and out. I am now back to square one, except now I have a shit ton of comps everywhere. I'm going back for vengeance during the beginning of summer. If I can pull it off then, then, the dream of being a pro blackjack player will be reignited, or, it'll finally be extinguished. Hopefully being armed with more experience, a comparable bankroll, and the shame of defeat will be the exact ingredients to propel me into the stratosphere.

The second installment of Japanese (102) is kicking my ass at Kapiolani Community College. Luckily Anki is keeping me afloat, but only barely. The most recent test results, and I was the highest grade, a humble 81%. I am getting wrecked compared to me near perfect results last semester. It's pretty sad considering it's my only class. Although it may seem like the slowest way possible to get an "education" (piece of paper), I'm pretty happy with taking one class at a time; I can really concentrate and focus my time on one specific subject and really learn it, opposed to cramming and putting out fires as different subjects reer themselves and draw focus away from each other. I say I'm trying to get a degree, but I'm really going back to school to actually learn stuff. Weird right?

I cleared out my ear, I had a bunch of sand in it. Cost me $180 to get some nurse to pump/flush fluid into/out of my ear to clear the sand. I can hear again, so that's cool. My knee, was healing, then I decided to play soccer, and I fucked it up again, so now I'm only now gingerly returning to jiu jitsu for the second time, and I'm going to hold off on soccer for probably three months or so. Shoulders doing better, I've starting developing an ambidextrous throw at the surf school so I don't blow out one specific shoulder, sort of spread out the load, and also save myself from potential "leash wraps."

The B.R.G.A. (Brian Roberts Guitar Academy) is climbing the yelp charts! I am now number 5 in Honolulu. Started at number 17! Slowly creeping up my rates, as the students enroll and quit. At one point I had 20 students enrolled. Now I'm down to 15 and probably dropping. I made more money doing that than gigs last month! Trying to find that perfect balance. Also looking at ways to keep my "hourly" high, streamlining all the steps in the process that is my lesson. It seems my biggest time vac is getting the videos uploaded to youtube. I did some research and apparently they make "smart" point-and-shoot digital cameras that upload straight to youtube. I think that'll be my next purchase as far as the B.R.G.A. income is considered. Save me a whole lot of time! Increasing my hourly retrospectively. 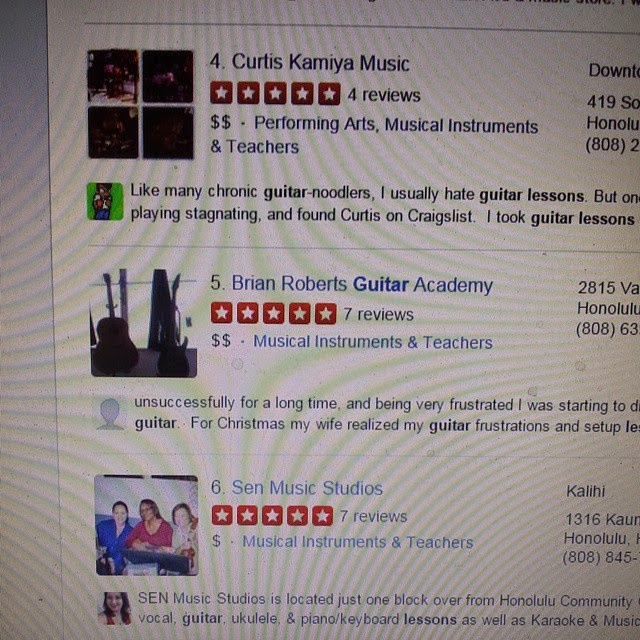 The rock band is still in its perpetual state of auditionees, quitters, people who suck, lack of consistency, and whole bunch of other bull shit. Still, I love it, so on it goes, shelling out $50+ a week just to make really loud music/noise for a couple hours once a week. Why is it so hard to find a competent singer, and a not-suck bass player?

THE REFORGING OF MASAMUNE! (Chrono Trigger reference) Holy shit. I cracked out on my original RG. The maroon one. My first real guitar. I completely gutted it, scraped off  15 years of finger gunk off the fretboard. I'm debating as to whether or not to replace the whole neck, or just live with the shitty worn frets. It'll probably cost around $500 to completely overhaul (new wiring, new pick ups, new pots, new switch, new output jack, a tremol-no, allen wrench holder, and the labor to install these things). Why bother? It's an Ibanez RG without the edge zero, where I can install a tremol-no, which is the most fucking awesome invention ever! I'll then make "Masamune" my practice guitar, and a great practice guitar it'll be because it's exactly the same as my performance guitars. 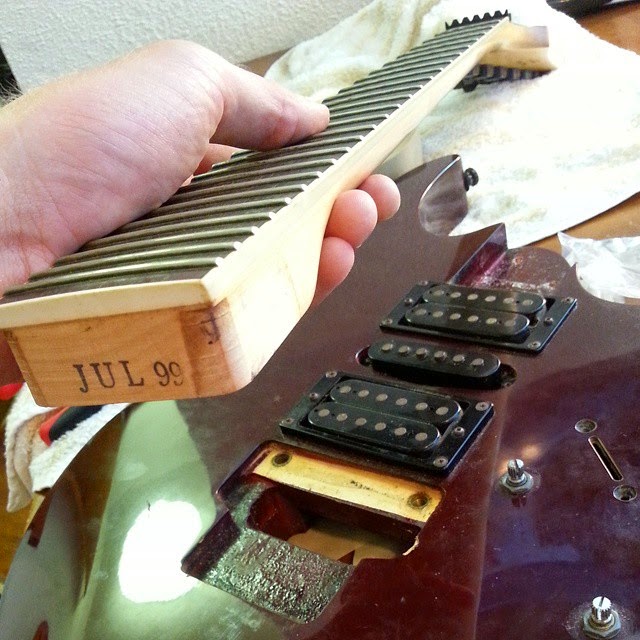 Last night I jammed with this keyboard player neighbor of mine. We did a game I invented; trying to score video game/movie s in real time as the game/movie is played without sound. It was pretty fun. I gotta film it next time.

I threaten it always, but who knows, it'll probably not be the case; I'll try to do these more often.
Posted by Brian at 2:20 PM No comments: