Leviathan still hasn't had a rehearsal since we were given the news that our drummer is still with us, which I find to be pretty lame that we haven't met in light of present circumstance. The members have gotten quite busy (myself included) with their lives... Luckily the Shar band has stepped up the rehearsal game so we've been rehearsing during this Leviathan void, so that's kind of cool, at least I'm pre-occupied.

B.R.G.A. (Brian Roberts Guitar Academy), has had a steady drop out rate since I claimed I was nearing maximum capacity, tragic prophecy haha. This is inverse to how much time I've put into BRGA since my last entry. As a growth/investment measure, I've registered the domain www.BrianRobertsGuitarAcademy.com which, takes you straight to my host website; www.TyrannyStudios.com/lessons.html clever right? No more tranny studio jokes yay. In addition to that I went on a graphic design tear and came up with logo ideas. Bumper stickers, logos, business cards, banners, picks, etc. See below. 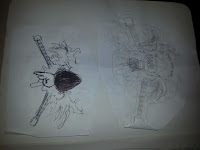 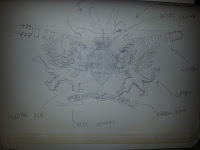 So, as you can see, without a rock band for my to exude some creative energy, I've allotted it to other things. I have even begun scoring a guitar showcase track for the new BRGA promo video. An updated version complete with it's own original soundtrack as composed by me! I'm going to use Guthrie Govan's "who plays it best" track as a guideline, and replace the generic improv I did over a Joe Satriani style backing track, and hopefully showcase multiple styles to attract a bigger pool of potential students. I've finalized the first 25 seconds of it so far.

The guitar pilgrim quest is ever-going. I've since had a few auditions, and I think I landed a spot with the local rock group Ignite the Red. I've known some of the guys in the band for at least 7 years and I got an official gig with them at the end of the month. I'm pretty excited about it, and I'm hoping it can help pacify some of my Leviathan frustrations.

Attendance for the N3 Podcast is at an all-time-low, so I'm tapering back its frequency yet again; every first Sunday as opposed to every other Sunday.

With one eyebrow raised, I also signed myself up for a surf lesson app/website called www.gosurflife.com and had a call with the entrepenuer based out of Canada. I'm hoping to operate on the fringe hours of the surf school I currently work at to pick up some extra, low-stress cash. Supposedly this will launch in June or July or something. We'll see how it goes. Coincidently, I've taken the first step in acquiring my "blue card" from the boating department of the DLNR Honolulu to legitimize my surf-teaching. Supposedly there's like a 7 month waiting list or something.

Using my friend's Amazon Prime account I purchased a bit of stuff for the music and the house and everything arrived a couple days ago. Yay! I spent probably 2 hours among other things trying to install some stupid surf racks in the backyard. Very frustrating. But, I'm pumped none the less. I haven't bought anything for myself in quite some time, so it was about time! Plus, I'm sharing my space with another now and they need some room, so I'm freeing up some space with these little upgrades. 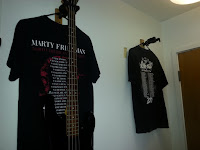 Flew back home at the beginning of this month for my niece's first birthday party. It was cute and quaint. Perfect for my liking, and yet another quick Kauai zap.

Over this past weekend I had a friend from Seattle whom I hadn't seen in probably at least 4 years fly into Oahu, and I met up with them on Monday, and although it was brief and extremely low-key, it was quite nice to reconnect even in the quaintest and uneventful of ways. I'm not sure our plans will afford another meeting but that's fine. I'm happy I got to see them!

The truck is fine, but already having some issues (damn you Chris! Just kidding). I think the reverse lights have gone out and one of the turn signal lights is burnt out. Minor inconveniences, but it's nice to be able to go through the mountains again and have that freedom.

That's all for now. Spend more time doing and less time talking. Peace out!
Posted by Brian at 4:07 PM No comments: